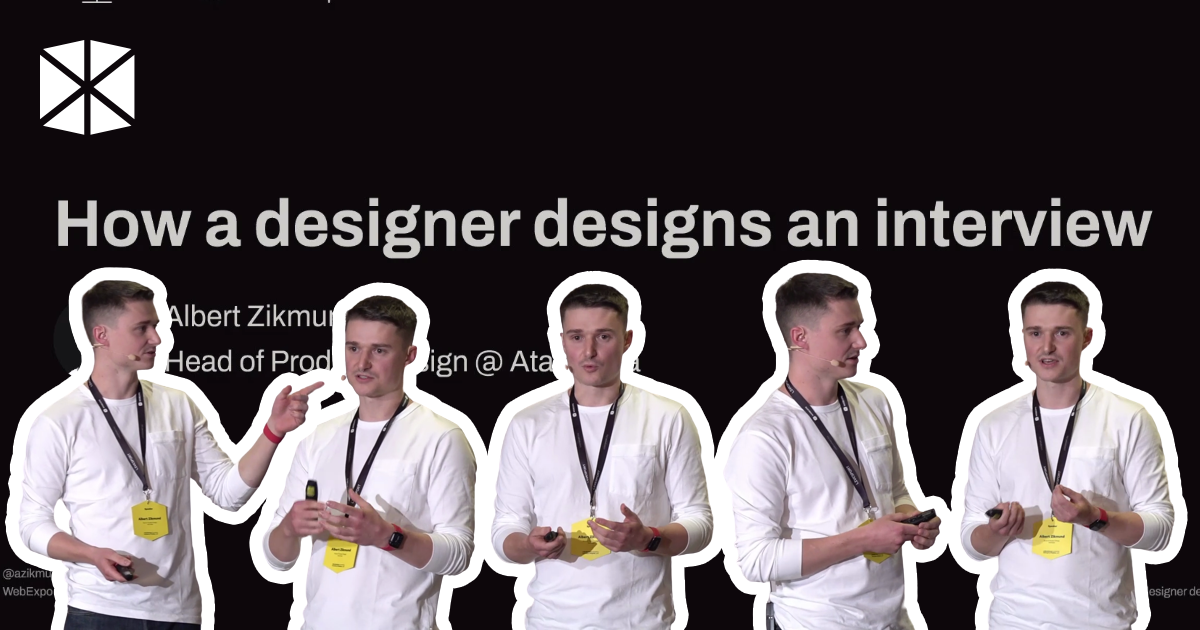 Before joining Ataccama as head of product design, Albert spent time working as a product designer, so he knows what he’s talking about when it comes to what skills new hires need to have.

Albert and his team were facing a problem; they were adding 150 people to their product engineering team with 9 new designers joining his team. He knew something had to change with regard to the interview process to ensure the longevity of the business. But hiring, especially when needing to increase your team by 300%, is easier said than done.

The process of hiring should come down to:

But with so many obstacles for recruiters along the way, it’s rarely that easy.

It’s clear to see this is true when you take a quick snapshot of the data.

Before you even get started, more than 50% of people in the product design space aren’t even looking for a new job and about 30% are just casually looking. So when it comes to hire hot new talent, it’s important to choose the right people because the right personalities can make or break a team or a business as a whole, explains Albert.

Albert began by looking back at his time on the other side of the table. He remembered becoming frustrated with the multiple interview stages and the way that companies aren’t as transparent as they could be.

Before getting started, Albert knew he needed to look at the key problems that candidates face during the interview process, so he could in turn seek out ways to streamline the process as a whole, developing three painkillers for the interview process to help ensure a smooth process for both candidate and interview team.

The key problems he found were:

Failure of the company to present themselves – Businesses are sometimes not transparent when it comes to company values or the job role itself. All of this makes it difficult for the candidate to make an informed decision about the company, as well as what the role entails moving forward.

Not paying attention to detail – Small errors on the company’s behalf can have a big impact when it comes to the candidate’s perception of the company and the hiring journey.

Once these key points have been identified, Albert and the team began working on designing an interview with the number one goal of Creating a process.

Firstly, Albert and the team spent time in a workshop, which looked at what it felt like to be a designer at the company. This gave Albert and the interview team a much better idea of the type of candidates to approach, but also how to structure the interview process and important areas of the job to be shared with the candidate.

Next, the team began drafting a set of Interview guidelines, for this business it was determined that three rounds were needed. From here, it was also decided who from the business was to be involved.

An important point that came up in this part of the process was the importance of ‘showing your cards’. This means, not failing to show the company and being transparent so candidates also get to know if they are a good fit.

It was determined that because during the first two rounds of the interview team and the candidate got to know each other well enough, the third round could be bespoke. For this part of the interview, the team could concentrate on expectations for the new candidates so both parties were clear. As a result, candidates started problem-solving for the business before even being hired.

Albert then took time to think about his third step- going the extra mile. This is where it became important to always challenge the process, and came in the shape of continuous improvement of the whole interview process, as well as speaking to previous hires to get feedback on their experiences.

By standing back and taking this approach to the interview process there have been some clear positive outcomes for the business, namely;

This approach has been so successful that other business areas have adopted the same approach with some small tweaks.

After working through this process Albert was able to take on 9 candidates that fit effortlessly into the team, and his long-lens approach is a testament to the fact that taking time to reorganise a process can have huge team and company benefits.

If you are interested in learning more about Albert’s process, then you can watch the full talk here: