Civilisations, culture, and the cloud: Will we still need nations on Mars? 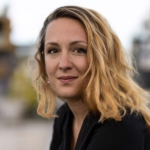 Saying that the nation-state is dying is a lofty, hard-to-imagine statement. But wondering what the structure of human society will look like in a completely new setting millions of kilometres away, with limited resources and a need for a new hierarchy? Suddenly, you start thinking about the evolution of social structure in a whole new light. This talk isn’t about making futuristic deductions about Mars, it’s about looking at the anatomy of civilisation, the lowest common denominator of ethics, law, and governance, and what that tells us about the future of humanity.

The WebExpo program will be confirmed before the conference, including details for this talk.

Sara is an archaeologist and evolutionary anthropologist who has spent the last decade in the tech sector, working for startups in London and LA and popularising the adoption of cutting-edge technologies like AI to the general public. Her passion for multidisciplinarity led her to co-found a research group CCHAOS at Czech Technical University in Prague, which focuses on understanding the evolution of human society and the predictions we can make about future social structures. She loves big dogs, fencing, and Monty Python.